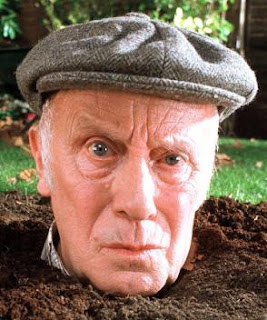 It's been some time since we had a conversation like this, mainly because I've been pretty angry - with you, with the Church, with the world - with me.
It crept up on me slowly, so gradually that I was not really aware of it happening, just a growing irritation with myself, disillusionment with the Church. frustration at the world.. you know the way it goes. It happens when ministry becomes institutionalized and the focus shifts imperceptibly and inexorably from the divine to the mundane. All too soon you wake up and find yourself with a 'Meldrew' ministry, where the constant refrain of a grumpy old man has replaced all the words of grace and joy.

I found someone had parked in the ministers car parking space at Church - I don't believe it!

Of course I can find a million and one reasons for the slide into disillusionment , into anger, and - yes - despair - some of them are even valid.. but not one of them is worth losing my relationship with you - or my ministry for. The last thing the Word or the world needs is an angry, grumpy minister.. even if they are justified in their anger ! There are enough Victor Meldrews in the secular world - we dont need them in the Church as well!

So thank you God, for the wake-up call and for the reminder that forgiveness is not just about being forgiven - it's about seeking the ability to forgive yourself and others for whatever has caused the loss of joy and grace and contributed to the shift of focus. It's about being free enough of the petty and the mundane to delight in the divine - and rejoice!


My anger and disillusionment are not going to be fixed or resolved overnight, but by your grace, I can take the first step and refuse to allow them to define me. No matter how it might seem, the Church and the world are safe in your care and keeping - the good news is still GOOD NEWS even in a grumpy world. Now that's something I do believe !

Posted by Angela Shier-Jones at 8:54 AM