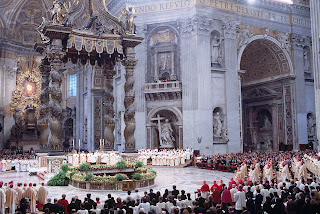 Good morning God,
I'm trying to unpack some of what I witnessed and experienced at St. Peter's Basilica recently.. I need your help on this because at the moment I am deeply disturbed by my initial reactions.
I went to St Peter's to see - to witness - to experience the beauty and grandeur of the place. I went to pray, for healing and for hope for myself and for others.. but most of all - I went in search of answers, little realizing that what I was questioning would be so brutally laid bare.


There was an annual thanksgiving and commemoration service for the Italian Air Force taking place in the heart of the Basilica on the day that I visited.The air was heavy with incense and gold glittered from every surface, sparkling in the lights illuminating the raised altar above St Peter's tomb. Inscribed in marble above our heads were the words and the language of those long since departed, reminding us of the solemnity and majesty of your actions and dealings with humanity - and everywhere Myrrh was present - scenting the statues of the dead, oiling the bodies of the embalmed and soaking into the bones of past Popes - all celebrating the powerful, centuries old message of the cult of death.

This was liturgy as I had never experienced it before: Here was the Church in all its pomp and power - dozens of priests and acolytes, cardinals in their brocaded costumes - all playing their part in the re-enactment of a murder , ready to offer, to those deemed worthy,  the opportunity to share in its spoils in order to preserve their own skins.

We were not allowed to join with those who were worshiping, we were excluded, cut off from the priests, denied access to the light - kept behind the barricades, only allowed to peer at the privileged as they engaged in their rituals.  And so we watched as tourists at another Vatican spectacle.

Whilst a big part of me died.

Here, laid bare, were all the lies I would rather not own up to about the Church...


Unexpectedly, at the end of the service, I was served the consecrated host without words, from a Gold cup, held by a Priest escorted by a guard who led him along in front of the barriers. I, and those with me at the front of the barricade were served as beggars might be served by a Lord with too many scraps from a table to dispose of by any other means. There was no grace in the giving, and I struggled to find grace in the receiving.

But I couldn't find you there Lord - not in the host, nor later in prayer.
Your real presence  eluded me.
In spite of so many portraits, so many statues - I couldn't find you amongst the things that were created for your glory. Too much of it seemed simply an artistic orgy in celebration of death and dying. The greater your pain, the more accurate the portrayal of your agony - the more people liked it. It was as though the resurrection never happened, was not something to celebrate, as though there was no Good News - only the cry to repent or be damned.


I can, of course, rationalise my initial reaction much of the above. I can say that what I saw was not 'normal', that what I experienced was not 'typical', that the Church really is so much more inclusive, open and joyous - but that obviously the Vatican has to take things more seriously, has to have guards in order to take care of the treasures it has been given, has to be more careful, exclusive, authoritative - MALE?

All this I could say, but none of that helps me dispel the question - what am I doing associating myself with any part of this?
Posted by Angela Shier-Jones at 9:04 AM